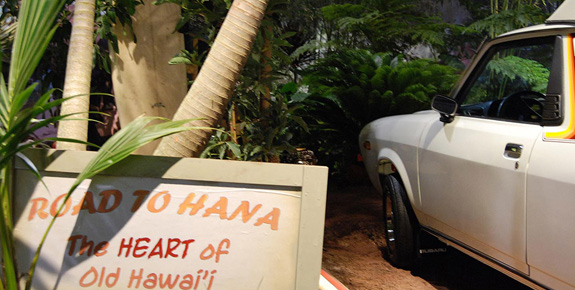 Getting lost on the road to Hana

That sounds romantic, doesn’t it? Actually, Jack Blandy of Stoney Bank Nurseries in Glen Mills almost did get lost there. About five years ago, on a trip to Hawaii, he and his wife decided to drive the famous road to Hana, a picturesque trip often called :the most beautiful drive in Hawaii.” Beautiful, yes, and also … curvy – 617 curves, to be exact, and 54 one-lane bridges. So Jack and his wife set out without a full tank of gas, thinking how long could this take? Longer than they thought. “It was not a good situation,” Jack recalls. “The gas tank was running on empty and the area was pretty desolate. There was nothing there, just a lot of lava and dark grays and blacks.” But they made it.

Having come within a centimeter of running out of gas once in an extremely desolate spot – would you believe the Sahara Desert in Morocco? – I think I know how unsettling the Blandys’ adventure was. But Jack’s a trouper. After his near-wipeout, he and his wife rode their bikes down a trail from a volcano – inactive, of course. Can’t keep this guy down.

Stoney Bank’s exhibit – Maui – focuses on the road to Hana. You can see the fruit stand here, where vendors would be selling fresh taro, pineapples and coconuts. Subaru, a major show sponsor, has lent an antique – ha! 1978 – Brat, which was half-pickup and half car, to place at the entrance to the road. (It’ll have a surfboard in the back.) The plantings include alocacias and colocacias, and all sorts of fruit trees – avodado, coffee, jackfruit, mango, starfruit and papaya. Sugar cane, too.

I stopped by this morning to chat with Hannah LaCasse – yes, Hannah is working on the road to Hana. She was adding lava rocks here and there as “finishing touches” to a display that features three or four different kinds of palm trees from Florida (too expensive to ship from Hawaii), golden bamboo, tree ferns, heliconias, lovely agaves, begonias, crotons, bromeliads, philodendrons, dracenas, cordylines and succulents like pencil plant and hens-and-chicks.

Behind Hannah, a Temple University Ambler grad who lives in West Chester, I could see variegated foliage and an array of forms and textures, just as Jack had promised. By the way, he got his lava and feather rocks from a large quarry in upstate Pennsylvania that gets them from California and the Southwest.

Hannah’s never been to Hawaii, or the road to Hana, but she says she’d love to go now. (Hannah, just make sure the tank’s full of gas.)