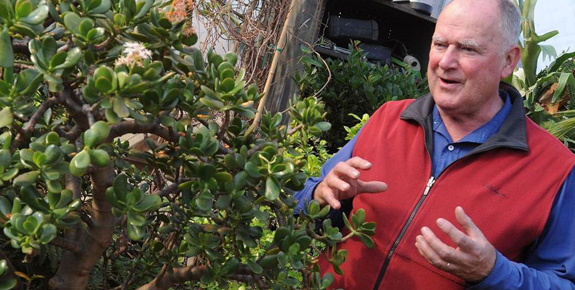 Jack Blandy, Founder and President of Stoney Bank Nurseries in Glen Mills, is again taking part in the Philadelphia Flower show. He inspects some of his plants going into the show in one of his greenhouses.

Agaves have nasty-looking sharp spikes atop their blue-green leaves, spikes “that could easily poke out an eye or slice a finger or arm,” explained Jack Blandy, president of the custom design landscaping company, exhibiting for the 33rd consecutive year at the Flower Show.

The succulents are one plant type among hundreds that Stoney Bank workers unloaded over several days at Philadelphia’s Pennsylvania Convention Center, where the Flower Show will bloom March 4-11.

With the theme “Hawaii: Islands of Aloha,” the Flower Show — a Philadelphia institution since 1829 — attracts exhibitors and vendors from all over the country.

Show organizers expect more than 250,000 visitors to crowd the 10-acre show this year.

Stoney Bank’s 2,000-square-foot exhibit, “Road to Hana,” is based on the famous twisty-turny road on the island of Maui. The three-hour, 52-mile uphill drive, with 617 curves, 56 bridges and panoramic views of lush pineapple fields, banana plantations and sugar cane fields, culminates at the quaint village of Hana.

Jack Blandy and wife Jane visited Maui five years ago and drove the Road to Hana, a trip he called “harrowing.”

The Stoney Bank display that recreates part of that drive is one of five central gardening features to ring the Flower Show’s central stage, where an expanded list of performances –- hula and fire dancing and music, among other disciplines — will take place.

Stoney Bank workers grew half the plants in the exhibit; others arrived last week in a filled-to-bursting moving van from Florida. The Blandys visited tropical plant suppliers there in December, selecting what they needed.

None of this comes cheaply. Jack Blandy estimates the company will spend upward of $125,000 on its exhibit this year.

An example: A single pot of feathery clumping bamboo cost $650. But, through careful propagation, growing and dividing over the course of several months, one plant yielded three dozen new plants, each about three feet tall. They will fill out the verdant under-story of Stoney Bank’s display to give it depth and texture, Jack Blandy explained.

The eight-foot rise in the exhibit appears much taller and deeper with the careful positioning of plants, trees, shrubs, a water cistern emblazoned with the original Dole pineapple logo, poi ponds where Hawaiians typically grow taro, a starchy potato-like vegetable, and other decorative features.

A sculptural metal gate by Berks County sculptor Greg Leavitt adds dimension, as does a vintage Subaru BRAT — short for Bi-drive Recreational All-terrain Transporter — in the foreground, a combination car/truck that Stoney Bank borrowed from the Subaru Museum. (Subaru is a major sponsor of the Flower Show.) It will be loaded with surfboards, wine, beer and scuba gear.

“I had to practically sign my life away to Subaru, promising I wouldn’t get the Brat dirty,” Jack Blandy said with a chuckle. The reason? An exhibitor borrowed a BRAT for a recent Northwest Flower & Garden Show in Seattle and drove it into a pile of mulch, muddying it up to make it look authentic.

A rainbow backed by invisible scrim adds to the three-dimensional effect.

During a recent visit to Stoney Bank’s numerous greenhouses, all heated to a tropically acceptable 70 degrees and 80 percent humidity, row upon row of pristine plants, lined up like soldiers, awaited their trip to Philadelphia. Jack Blandy cautioned a visitor to resist touching an odd-looking stick of fire plant, a poisonous variety that can cause an angry skin rash.

Lava “rocks” carved out of Styrofoam stood at the ready, as did totems fashioned from tree trunks. Workers brandishing spray-paint cans still toyed with the coloration of Styrofoam “breadfruit”; they resemble gigantic striped green eggs.

(The Blandys made their own breadfruit after they discovered that the real thing, imported from Malaysia and often weighing more than 80 pounds, cost $85 apiece.)

Many of the tallest tropical trees -– bamboos, Australian tree ferns, coffee, palms and enormous birds of paradise whose colorful flowers are bigger than footballs — date from Stoney Bank’s 2010 Flower Show exhibit, when “Passport to the World” was the theme and Stoney Bank’s exhibit centered around New Zealand. “We just kept them and nurtured them,” Jack Blandy explained, “and they got a lot bigger” -– an understatement if there ever were one.

He called the weeks leading up to and including the Flower Show “exhausting and stressful.”

This year should be easier, though. With tender and perishable flowers less of a focus for the Stoney Bank exhibit than in previous years, refreshing failed plants at least twice during the week plus deadheading flowers every night needn’t be as extensive.

The elder Blandys live on a corner of the 24-acre Stoney Bank property, up a steep hill from Stony Bank Road in close-in Delaware County. Jane Blandy is the company bookkeeper as well as executive director of the Wentworth Home, a private, nonprofit residence for seniors in the 100 block of South Church Street in West Chester.

The Flower Show is always a fertile showplace for Stoney Bank, whose custom and often high-end landscaping projects are largely in Pennsylvania, Delaware and New Jersey, the 35-year-old Joe Blandy explained. (What tropical garden work the nursery does is mostly for clients with vacation homes in warmer climes.)

The recession hit the company in 2007 and 2008, he said. “Work wasn’t canceled but homeowners scaled back projects and bought fewer add-ons. We didn’t get as many calls for new projects during that time either.”

Sales have picked up measurably since then. And, if this winter’s mild and quirky weather stays true to form, “We’ll be out preparing and planting as soon as the Flower Show ends,” he said.

No rest for the weary, in other words.

Next up: Planning for the 2013 Flower Show, centered around Great Britain, a sure crowd-pleasing theme that brings a tired grin to Jack Blandy’s wind- and sunburned face.