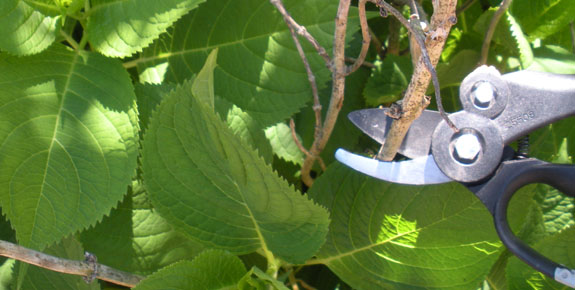 Graft – A plant that has a scion (top portion and the desired plant) placed and successfully healed onto a rootstock.  The scion and rootstock have different genes and a graft scar is visible where the scion has been grafted onto the rootstock.

New Wood – Growth that is of the current year; it is generally herbaceous.

Old Wood – Growth that was formed during the previous year; it is generally woody.

Suckers – Shoots that come from the roots of a tree or shrub, often near the main trunk or base of the plant.
*Special Note: Suckers that appear from grafted plants should be cut out as they are not of the same plant material as the grafted plant.

Hydrangeas are a varied group and it is important to know the species and cultivar of the plant you intend to prune.  Flowering can be delayed or absent if pruning is not done correctly.  Some hydrangeas will flower on new wood and can be pruned down to the ground in the spring.  Hydrangeas that flower on old wood should be pruned less often, with the focus on pruning out weak branches.  Leave pruning hydrangeas until spring, as severe winter weather can damage a fall or winter pruned plant.  Waiting until spring to prune hydrangeas has the added bonus of winter interest provided by spent flower heads.

Rhododendrons and azaleas normally require very little pruning.  When pruning is necessary the main focus should be to maintain healthy growth and cut out dead or diseased branches.  On grafted plants, keep an eye out for suckers growing from the root stock and cut these off as soon as they appear.

Common Lilacs (Syringa vulgaris) develop their buds on old wood and any pruning should occur shortly after they have finished flowering.  Some plants may be grafted and suckers from these plants should be removed.  Suckers that develop from non-grafted plants can be allowed to remain and over time replace older branches to ensure the plant is full in appearance and health.

Viburnums will often have newer shoots coming up from the base of the plant.  These newer shoots should be left to replace older branches as older branches become less vigorous, untidy, and are cut out.  It is best to cut out older wood after the shrub is finished flowering.

Be sure to use sharp pruners and loppers that are sized correctly for the branches being pruned.  It is important to have clean cuts to decrease the plant’s healing time and reduce the risk of infection and disease.