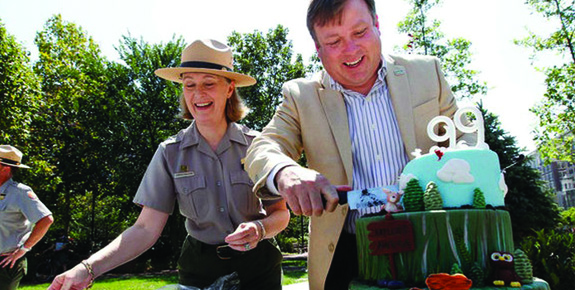 In recent years, Philadelphia Flower Show themes have whisked visitors to far-flung destinations from Ireland to Hawaii and the fictional Arendelle (the kingdom in Frozen, as part of last year’s blockbuster “Celebrate the Movies” show, featuring a Disney partnership). But the 2016 show, from March 5 to 13, will draw inspiration from closer to home.

The show will be a partnership between the Park Service and the Horticultural Society, including exhibitions inspired by 40 parks from Acadia to Muir Woods, as well as local sites like Independence and Valley Forge National Historical Parks. New next year will be an education studio, where park rangers from around the country will visit in person and via webcast to give presentations about plant life, pollinators, and other topics. Tickets also went on sale Tuesday.

“I was brainstorming ideas for the centennial,” she said, and the Flower Show seemed like an ideal way to celebrate the 408-park system.

“One of the things we’ll have at the Flower Show is a ‘Find Your Park’ pavilion,” added Joanne Schillizzi, an interpretive specialist at the park. “We’ll be bringing the national parks to Philadelphia.”

The Park Service, much like the Flower Show, has been working hard to engage a new generation of visitors, including with a #findyourpark hashtag.

The question for the Horticultural Society will be whether “Explore America” can sustain the interest generated by last year’s movies theme, which helped double attendance among children and students.

“We certainly had a lot of younger folks come to the show last year,” said Sam Lemheney, chief of shows and events at the Horticultural Society. He thinks kids also will be interested in a close-to-home display of the natural wonders and historic sites of the national parks.

“There’s a natural connection with the younger audiences,” he said.

Lemheney sent out an email in May to invite exhibitors to select which park they would highlight, and has been connecting them with rangers at the respective parks for advice. “We said, ‘No repeats.’ I did have a few fights here and there, duking it out a little bit.”

Stoney Bank Nurseries in Glen Mills claimed the right to a Yellowstone-inspired exhibit, and landscape designers there already are contemplating how to capture the landscape of wildflowers, charred wood from wildfires, and geysers (fog machines and fountains will likely be put into service).

Hannah Lacasse, a landscape architect at Stoney Bank, said she was excited to help showcase the country’s history of natural-resources preservation.

But, she said, there is the worry that exhibits designed to mirror natural sites just won’t be as flashy as those inspired by the artworks or animated films of past years.

“This year, it might be a little more challenging,” she said. “You design it to look natural, but when people see a natural garden, they don’t necessarily associate that with the design work that goes into it.”