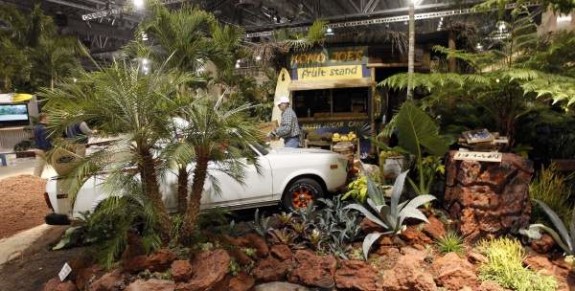 Glen Blandy with Stoney Bank Nurseries works on an exhibit in the 2012 Philadelphia International Flower Show, “Hawaii: Islands of Aloha,” in Philadelphia. The show is scheduled to run through March 11. / Matt Rourke/AP

PHILADELPHIA — If you are looking for palm trees and white sand to escape the remnants of winter, look no farther than Philadelphia.

Visitors to the city’s International Flower Show can wander through a tropical paradise of sorts thanks to this year’s theme, “Hawaii: Islands of Aloha.” The weeklong horticultural extravaganza opens today.

Exhibits include a fantasy surf shack, a beach wedding, a 25-foot-tall waterfall and a tribute to Pele, the Hawaiian goddess of fire. Hula dancers and musicians from the Aloha State will perform, and contestants will vie for prizes in daily floral arranging competitions modeled after the “Iron Chef” TV show.

And, of course, there will be flowers. Thousands upon thousands of orchids, anthurium and other blooms commonly associated with the Hawaiian isles will be spread throughout 10 acres of fragrant displays.

“If you’re an orchid lover, this is the place to be,” said Drew Becher, president of the Pennsylvania Horticultural Society, which sponsors the show.

About 250,000 people are expected at the Pennsylvania Convention Center for the event, which is billed as the world’s largest indoor flower show. It’s also one of the oldest, dating back to 1829.

The grand entrance installation combines flowers with video and special effects of crashing breakers to create an “orchid wave.” The sloped roof of a thatched hut will double as a projection screen, where an image of Pele will talk about Hawaiian culture.

Show designer Sam Lemheney said it’s important to bring the exhibits to life with integrated technology. The show is not a flower museum, he said, and it’s not enough just to have “a screen built into a planted set.” Exhibitors were allowed to use flat screens for the first time last year.

“This has to be entertaining and it has to be interactive. That’s what people expect,” Lemheney said.

A beach wedding scene dreamed up by Robertson’s Flowers of Philadelphia uses mostly flowers flown in from Hawaii, including several varieties of ginger and heliconia. The “ocean” is formed by 1,500 glass cylinders filled with blue water and lit from below; white orchids will create the white foam of the “waves.”

The display’s lead designer, Eric Schellack, traveled to the island of Kauai for inspiration and was surprised at how the actual geography — including mountains and farms — forced him to rethink his preconceptions of Hawaii.

The result helped inform his design and made it an exciting challenge, he said.

“In this part of the country, we’re not doing tropical arrangements every day,” Schellack said.

Flower show organizers worked with Hawaiian tourism officials to help ensure authentic representations of the culture. Neither group wanted the exhibits to devolve into stereotypes including coconut bras, grass skirts and tiki statues.

“That’s not something that we promote or perpetuate at home,” said Kainoa Daines, sales director for the Oahu Visitors Bureau.

Daines will be at the show along with other Hawaiians set to demonstrate native weaving and lei-making, as well as hula dancers and musicians. A marketplace area called The Hawaii Village will offer island-related crafts and merchandise.